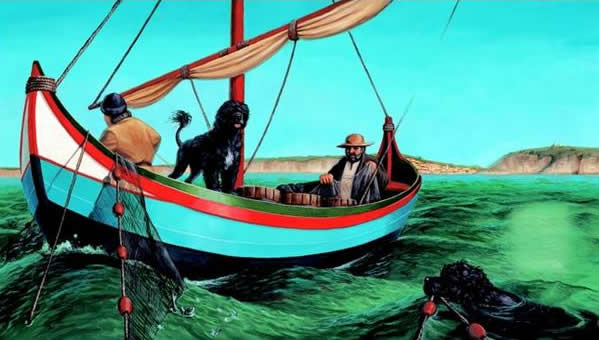 The existence of the Portuguese Water Dog along the Algarve on the coast of Portugal can be traced back to very remote times. Evidence exists which indicates that in pre-Christian times, the "water dog" was held to be nearly sacred, and severe penalties came to those who killed a "water dog". companion and guard dog. He lived on the working boats where he was taught to herd fish into nets, to retrieve lost tackle or broken nets, and to act as a courier from ship to ship, or ship to shore.

Tasks required the dogs to be excellent swimmers and seafarers. Dogs were capable of diving underwater to retrieve fishing gear and to prevent the escape of fish from the nets. Constant swimming and working with the fishermen accounts for the remarkable muscular development of their hindquarters. As noted in the breed standard, this dog of exceptional intelligence and loyal companionship willingly served a master well.

In the 1930's, Vasco Bensaude, a wealthy Portuguese businessman with an interest in dogs, was introduced to the Portuguese Water Dog by friends. He was told of a "magnificent working Cão de Água", and although there were only a few dogs still working on the boats of the fishermen, he eventually acquired a dog named "Leão". "Leão" (1931-1942) was the founding sire of the modern breed and of which the original written breed standard was based. The first litter was born on May 1, 1937, at the Algarbiorum Kennels.

It would not be for another 30 years that the Portuguese Water Dog would come to America. Deyanne and Herbert Miller are credited with the introduction of the breed to the United States. Their first imported Portuguese Water Dog, whelped July 12, 1968, was a descendant of Leão, Vasco Bensaude's dog. Named Renascenca do Al Gharb, she arrived in the United States on September 12, 1968. She was affectionately known as "Chenze" and was the foundation bitch of Farmion Kennels. "Chenze" lived until she was 15 years old.