When looking to get a purebred dog you always want to make sure you are educated on the breed.  Portuguese Water Dog breeders believe strongly that good health in dogs can only exist with open conversation about health issues. Reputable and good breeders should freely be able to discuss this with you. Portuguese Water Dogs overall are healthy, robust family companions.  But as in humans, and same in all breeds of dogs there are always health issues to watch for.

The Portuguese Water Dog is a medium size dog and very sturdy.  They are defined by their job which was to help the Portuguese Fisherman. Their body is slightly longer than it is tall, with a straight, level top-line. The chest is broad and the brisket reaches the elbows. Their heads are large and broad and should have a pronounced occiput and stop. The ears are heart-shaped and hang down next to the head. The eyes are dark, alert and expressive. The tail is thick at the base then tapers toward the tip to assist them as a rudder while swimming. The coat is thick and either curly or wavy.  They are a single coated dog with no undercoat and does not shed except like humans do.  Portuguese Water Dogs may be black, white, brown, black with white or brown with white. As the name suggests, the breed is made for swimming, complete with webbed feet, which is more webbed between the toes than most other swimming breeds.

Exceptionally intelligent and a loyal companion, the PWD immediately impressed North Americans with its willingness to turn in stellar performances in obedience trials. The breed possesses a spirited disposition and is both brave and self-willed. It has limitless stamina.

PRA: Progressive Retinal Atrophy is a genetically transmitted eye disease found in about 80 breeds of dogs, including Poodles, Akitas, Labrador Retrievers, and the Portuguese Water Dog. PRA causes the blood vessels of the retina to atrophy, or waste away. The end result of retinal atrophy is a gradual but progressive blindness. There is a simple genetic DNA blood test to identify normal non-carriers, carriers and affected dogs. For breeding purposes Normal and Carrier and Affected rated dogs can be bred to A rated non-carriers, and the resulting litters will not produce affected dogs.

Most breeds have some dogs with hips that are called dysplastic - that is the hip joint is not formed perfectly. The dysplastic dog may have no pain or problems, or it may experience mild to severe discomfort when moving. Treatment, if necessary, can consist of aspirin, anti-inflammatory medication, or surgery in the most severe cases. Breeders should not breed a dog that is diagnosed with hip dysplasia, and should make sire and dam OFA, OVC, and PennHip certificates available to prospective puppy buyers.

Addison's is a rare disorder found in animals and in people. John Kennedy and Jane Austen, among others, lived with the disease. Addison's disease is caused by Adrenocortical (Adrenal Cortex) insufficiency - that is, the adrenal glands stop producing certain hormones that control sugar metabolism and maintain the the salt and water balances in the body. The cause of Addison's in PWD's is unknown at this time. 1 in 200 PWDs are afflicted.

Juvenile dilated cardiomyopathy (JDCM) did not acquire its name in our breed until about 1997. Sometimes, with no warning at all, an otherwise normal pup was simply found dead. There is now a test offered by the University of Pennsylvania for all PWDs. This test will determine whether they believe a dog to be a carrier or not. As long as one parent is clear the litter will not be affected.

GM-1 Storage Disease is a rare disease that is only found in humans and Portuguese Water Dogs (and English Springer Spaniels). It is a genetically transmitted fatal neurological disorder that is apparent around 5 months of age.The only way affected puppies can be produced is by breeding a Carrier to a Carrier and no responsible breeder would do this.

​To learn more about the health of Portuguese Water Dogs, visit: http://pwdcc.org/PWDCC/index.php/health 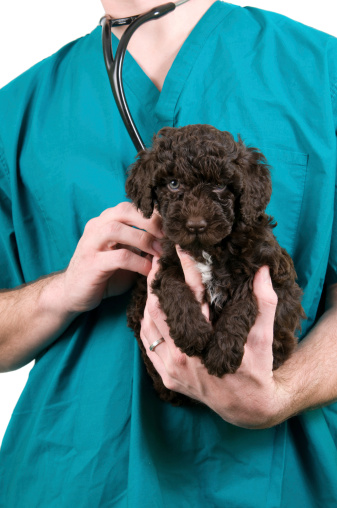